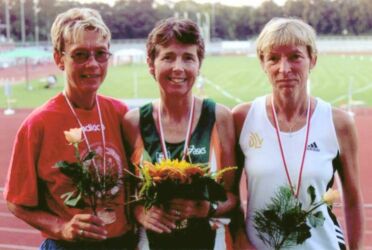 The Munster senior and junior cross country championships were held in beautiful sunshine in Currow, Farranfore, county Kerry today.  The course used was the same as last year, but the flack of rain over the past week meant an absence of the dreaded muddy conditions.  The good underfoot conditions made for some very good races.  The junior mens race saw William Harty of West Waterford tear off from the start and win by four seconds from Eamon O’Connor of Togher.  Togher won the team contest from Leevale.  Local runner Maureen Harrington was first to lead in the senior womens race, with Louise Cavanagh of UCC running on her shoulder.  Cavanagh never got into the lead, and, while she was close for much of the race, Harrington had the strength to race away on the final lap.  Carmel Parnell of Leevale had a good run to finish third, with UCC winning the team contest.  After the second of five laps in the senior mens race there were just three in contention, East Cork’s John Kearney, Pat Nugent of Clare and Michael Hassett of Clare.  Kearney was first to drop off the pace leaving the other pair to battle it out.  nothing separated them until Hassett established a lead close home, just keeping on to record a good win.  East Cork were surprise winners of the team contest from Cork champions Leevale.