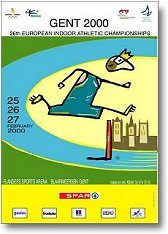 Mark Carroll hopes to cap a fantastic season when he lines up for the 3,000m at the European track and field championships which take place in Ghent, Belgium over the weekend.  The Leevale runner is in the best form of his career and starts the race as a strong favourite to win gold.  He runs the heats on Friday afternoon, with the final scheduled for Sunday afternoon.  Best of luck Mark!  There is a tinge of disappointment in Leevale, however, at the omission of Donal McCarthy from the Irish team.  A few weeks ago he travelled at his own expense to Scotland to take part in their indoor championships.  His trip was well rewarded when he lowered the Irish record twice in the heats and final.  At the Irish championships he was again in tremendous form, winning the 60m title with ease.  After winning the national title and setting a new record for the 60m he could have been forgiven for thinking that he had done enough to gain selection but unfortunately the selectors did not see it his way.  Que sera sera.