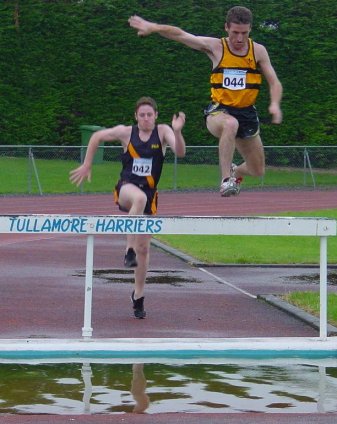 Conditions were far from perfect for the second leg of the Mazda national track and field league at Tullamore on Sunday.  It was cool, windy, wet – just another typical Irish summer’s day!  Clubs were chasing points to make the line-up for the finals in Tullamore on Sunday week.  Unfortunately, most clubs were without a number of their athletes, with holidays the main excuse for their absence.  And a clash with the world university championships will mean more depleted teams for the finals.  Leevale was the only Cork club involved in the Premier division with both mens and womens teams in action.  Despite being without a number of athletes, we performed reasonably well in all events, and, depending on the results from the other section in Santry, are hopeful of making the finals.  UCC carried the Cork hopes in the mens Division 1, while Blarney Inniscarra carried the flag in the womens Division 1.  Damien Collins of Leevale had an excellent run in the steeplechase, winning in a seasons best.  Clubmate Brian Murphy ran on well to take second in the 400m, with Tony Lilley, representing UCC and running as a guest, taking third.  Later in the day Lilley returned to track to take a good second in the 800m after seeming to be out of it for much of the race.  Paul Kelleher was another UCC runner to score maximum points when he won the 400m hurdles.  And Leevale’s Jer O’Donoghue got back to winning ways in the 100m.  Leevale’s 4x100m squad completed impressive change-overs to record a good win, but the 4x400m team was unfortunate.  Darren O’Donovan went off first, keeping the team in contention before passing the baton to Brian Murphy who took them into a good lead.  John O’Sullivan ran next, doing just enough to keep the team ahead.  Donal McCarthy anchored the team, running well within himself for the first 200m, and then upped the pace and looked to have the race won when he collapsed onto the infield area just metres before the finish.  Initially it looked like a serious achilles injury, but an examination in the local hospital gives hope that it may not be too serious.