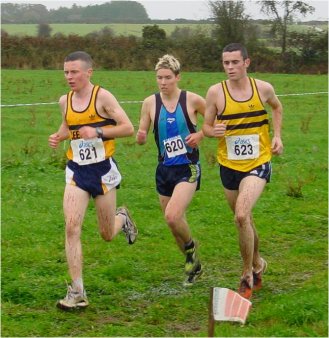 Heavy rain made for unpleasant conditions for everyone at the County Novice Cross Country Championships at Carraig na bhFear today.  The local athletic club had everything in perfect condition as always, and the course was a fair challenge to all.  The novice mens race saw a group of some eight runners break away shortly after the start.  By the end of the first lap that lead group was down to three, with Ronan Guirey, James Grufferty and Sean Conroy, all from Leevale, getting away from the rest.  All three took turns leading wit no one prepared to yield.  Going out on the last of four laps Guirey showed signs of fading, but was still near enough.  However, the race ended as a contest with some 800m to go when Conroy started to sprint, without any response from the others.  Conroy went on for a good win and in the process leading a Leevale 1-2-3 as Grufferty took second and Guirey third.  With Derek O’Leary in sixth place Leevale easily won the team contest, the first time in a good few years.  The first two finishers are both juniors and will lead the Cork challenge for places on the Irish junior team for the European junior cross country championships in December.  Jennifer Goggin of West Cork opened up a big lead from the start of the womens novice race and looked to have the race at her mercy by half way of the 3,000m race.  However, Elizabeth Crowley, also of West Cork, never gave up and kept chasing the leader.  She was rewarded as she caught the leader with 1,000m to go, and quickly set about building up a lead herself, a lead that resulted in victory for her.  Goggin paid the price for her early pace when she was passed close home by Togher’s Kelly O’Keeffe.  With two in the top three West Cork were convincing team winners. (Results).