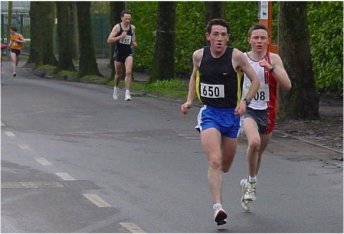 Cool conditions greeted the 200 or so runners who congregated on the Marina this morning for the Cork BHAA 5k road race.  There should have been more, but stories abounded of the few who completely forgot about putting the clocks forward an hour!!  The leaders in the race stayed together for much of the first mile, reached in 4min. 45sec.  James Grufferty was to the fore, flanked by Eric Meade and George Murray, with Roy Fahy and Ronan Guirey working hard to keep contact.  Meade made his move to the lead after a mile and a half, but was soon joined by Grufferty and Murray.  Shortly after Meade dropped off the pace, leaving the two leaders to cover the second mile in 5 minutes.  From there to the finish the lead changed several times, but Murray proved strongest in the last two hundred metres, going on to win in a time of 15:19, with Grufferty second in 15:27.  Murray, from Dromina near Charleville, plans to spend the summer building up for next season’s cross country championships.  Grufferty, from Glanmire, had planned to run the All Ireland schools cross country championships last Saturday, but that event, like a lot of others, was cancelled due to the Foot and Mouth problem.  Sinead Cummins made the journey from Kilkenny to record a good win in the women’s section, with National novice cross country champion Carmel Crowley from Bandon in second.  Crowley was in fact running her first BHAA race. (Results)