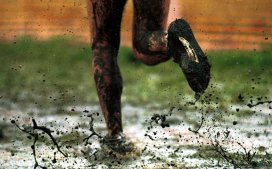 The first day of the World Cross-Country Championships in Ostend, Belgium provided ideal conditions for those who thrive in the mud.  The tough conditions were undoubtedly a help to Great Britain’s Paula Radcliffe as she finally clinched a World Cross-Country Championship, beating out Ethiopia’s Gete Wami in the women’s long-course race.  In the men’s short-course race, Leevale’s Fiachra Lombard finished 84th in a time of 14:02.  The race was won by Kenya’s Enock Koech in 12:40.  Gareth Turnbull was the only other Irish competitor, finishing in 54th position.  In the junior women’s race, Lesley Shannon led the Irish team to a 19th placing, when she finished in 88th place herself.  Behind her were Fionnuala Britton in 98th, Michaela Lynn in 108th, and Ava Hutchinson in 110th.  Tomorrow’s schedule includes the women’s short-course race, the junior men’s race, and the senior men’s long-course race, featuring Leevale’s Cathal Lombard.  (Championship Results)