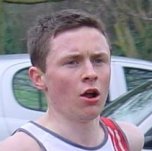 The annual Turkey Trot, organised by Cork BHAA, was held over the Marina circuit this morning.  Weatherwise it was a morning for participation rather than spectating as a bitterly cold wind kept temperatures down. As usual there was another very big entry with all proceeds going towards Cork Simon. James Grufferty and Kieran Ryan were first to lead as the runners moved off the Marina, followed by Robbie O’Neill and Billy O’Rourke, with Ronan Guirey further back. Ryan faded a little before the mile mark, and that left Grufferty on his own in the lead.  As the race progressed his lead dwindled a little as O’Rourke and O’Neill worked together to close on the leader.  With a mile to go O’Rourke finally went in chase of Grufferty, with Guirey also over taking O’Neill.  Try as O’Rourke might there was no catching Grufferty who ran on strongly to cross the line in a time of 20:49, fifteen seconds ahead of O’Rourke.  Joan Hough had a good race to win the women’s section in a time of 24:18, with Mary Sweeney second some thirteen seconds behind.  That was the easy part!  The rest was up to the officials who had to trawl through all the results to find out who would get the prizes.  In advance of the race each entrant had to predict their finishing time, with the prizes going to those clocking times closest to their actual finish time.  No watches were allowed, nor were there any mile markers. The result showed Michael Murphy from Novartis just one second away from his predicted time, followed by Eric Coogan of Murphy’s (3 seconds), Liam Horgan of Quest (3 seconds), Tony Cooke of Twomey Transport (3 seconds), Dan Horgan of Sloan Construction (4 seconds), and Liz O’Sullivan of SHB (6 seconds).  ( Results).