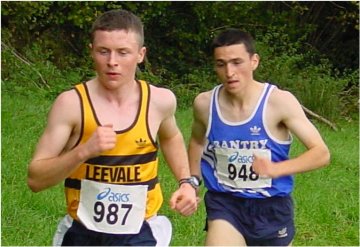 The Cork Intermediate and Vets Cross Country Championships were held in Macroom today.  Warm pleasant weather was the order of the day.  Alan O’Shea of Bantry was first to set the pace in the intermediate race, striding clear of the rest of the field in the opening stages.  James Grufferty of Leevale was the only one to give chase, catching the leader halfway through the first of four laps.  From there on the pair of them (see photo) stayed close together battling every yard of the course.  However, halfway through the final lap Grufferty finally got away and went on to win with O’Shea second, a big improvement for the west Cork man.  Derek O’Leary was fifth and Ronan Crowley 13th.  Unfortunately the club missed out on a fourth man for the team as Ronan Guirey was busy taking part in the National Duathlon which he duly won, with Trevor Woods second.  Eamon McEvoy ran a great race to take third and first vet prize, just ahead of Tommy Murphy of Skibbereen.  Robbie O’Neill of North Cork ran strongly in the latter half of the race to finish fourth, ahead of Derek O’Leary of Leevale and Michael Dunne of St. Finbarrs.  West Cork won the team contest.  Mary Finn of Duhallow won the womens race as a vet, finishing well clear of Elizabeth Crowley of West Cork the first intermediate, who in turn was well clear of Marjorie Lynch of West Cork.  West Cork were team winners.  Each finisher, as well as officials, were presented with a nice sample of Folain preserves produced locally.