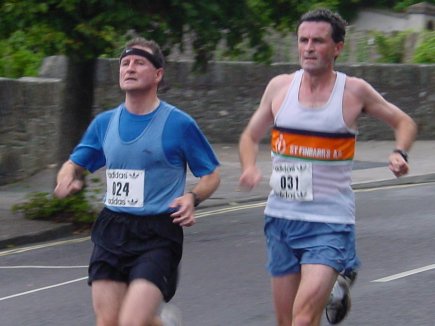 The annual Streets of Cobh road race (sponsored by Miskellas Super Valu) was held in damp weather conditions tonight.  Run over two laps of the outskirts of the town, it afforded spectators a good view of the race.  Eric Meade of East Cork and James Grufferty of Leevale were soon away from the main body of the field, while Alan O’Shea of Bantry and Timmy Murphy of Togher werre locked together in their own battle for the minor placings.  Going into the third mile Grufferty moved up a gear and pulled away from Meade to win in a time of 15:50, some nine seconds ahead of Meade.  O’Shea held on to third after a sprint finish, with the pair given the same time (16:15).  Mary Sweeney of St. Finbarrs was well clear in the womens section to win in a time of 19:24.  The Murphy brothers, (Michael, Edward, and John) rolled back the years by racing together once again.  These days Michael is better known as the chief organiser of the Novartis road race, while Edward is a priest in Cape Cod.  John availed of the opportunity to complete the threesome, running his first race in years.  Edward still retains his Leevale status while Michael has long moved on to St. Finbarrs!!  Photo shows Edward (left) neck-and-neck with Michael. ( Results).