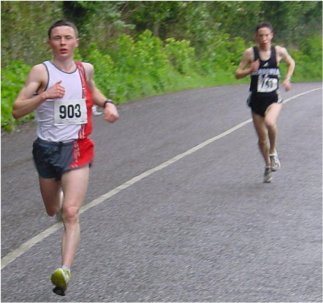 UCC athletic club staged their annual road race this morning under BHAA rules.  A damp dreary morning greeted the big field of competitors, although spectators were probably worst affected, as the runners were well warmed up after a mile or so.  The 10k race was held over the Lee Road / Carrigrohane Road circuit.  First to show in front after the gun was Fergus Meade who was running his first BHAA race.  He was probably unaware that the first three miles of the race were a tough uphill slog, but then again, fortune favours the brave.  James Grufferty was the only other runner who attempted to keep pace with Meade, with both reaching the one mile mark in five minutes, good running considering the uphill nature of the course.  After that the pair settled down and ran together till they reached the start of the Straight road.  There Grufferty upped the pace and ran the last two miles to the finish on his own, reacing the finish tape in a time of 32:54, some half a minute clear of Meade.  There was a close battle for the third place spot, with Michael Murphy just getting the better of Paul O’Mahony in 34:35.  Kieran O’Sullivan was 5th, followed by Ken Mulcahy in 6th.  Carmel Crowley, All Ireland novice cross country winner, was the impressive winner of the womens race in a time of 37:41, ahead of Angela McEvoy (39:32), and Mary Sweeney (39:47).  In the Women’s O-45, Leevale’s Brid Murphy was the winner.  Jerry Forde won the wheelchair section. ( Results)