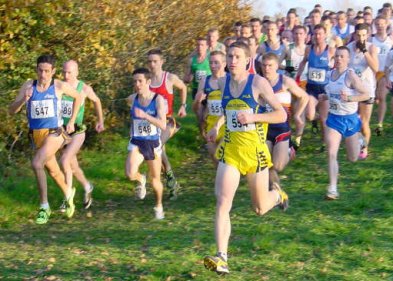 The national inter-county cross country championships, held at St. Augustines College Dungarvan on Sunday, provided a feast of athletics in ideal weather conditions.  With places on the Irish teams for the European cross country championships at stake no effort was spared by those participating.  Before the race, Martin McCarthy (red singlet near front of photo) of Leevale promised he would change his tactics in the mens race.  Staying well off the pace for the first half of the race he then ran on strongly in the closing stages to finish sixth, an excellent placing considering his absence away from athletics.  Clubmates Fiachra and Cathal Lombard embarked on an altitude training trip to Kenya in the run-up to the race.  Fiachra was well up with the leading pack for the early stages of the race, but then lost contact and eventually dropped out.  Cathal never got into the kind of form that he is capable of and finished 16th.  Behind him Donncha O’Mahony from East Cork continued his come-back to place 30th, Cathal O’Connell from St. Finbarrs was 37th, Eric Meade of East Cork 41st, and Desmond Casey from Millstreet 46th, to give Cork a third team place finish.  The race was won in emphatic style by Seamus Power from Clare who recorded his seventh successive win in this race.  Gareth Turnbull was second with Vinny Mulvey in third saying afterwards that this was most definitely the hardest race he ever ran in Ireland.  The men’s junior race saw James Grufferty of Leevale, on the comeback trail from illness finish best of the Cork runners.  Grufferty finished in 13th place, two ahead of Fergus Meade of Glenbower, with Mark Lehane of Bandon 20th, Sean Conroy of Leevale 25th, Brian McMahon of Carraig na bhFear 28th, and Alan Foolkes of Leevale 31st, giving Cork a third place finish in the team contest.In the senior womens race, Ann Keenan Buckley of Laois set a strong pace from the beginning and recorded a convincing victory.  Maria McCambridge of Dublin was second, followed by Valerie Vaughan from Blarney in third.  Carmel Crowley from Bandon ran yet another good race to place tenth, just one place ahead of UCC’s Louise Cavanagh.  With American based Michelle Scott in 14th, the Cork team combined well to finish second, just three points behind Dublin.  In the junior womens race Niamh Walsh of Glenbower prove best of the Cork runners in 6th place, with the Cork team fourth. For underage runners the course in St. Augustines was ideal, the absence of hills a blessing for many.  The day got off to a great start for Cork in the girls under 14 race.  Here Joyce Curtin from Glenbower ran a great race to continue her unbeaten run with another good win.  Behind her Rena Buckley of Blarney Inniscarra was also in great form taking the bronze.  Glenbower were second team.  Jamie McCarthy of Riverstick Kinsale ran a confident race at under 16 level, finishing fifth.  Mark Hanrahan of Leevale is another gaining in strength with every outing and he also ran well to place tenth.  Ciaran O’Lionaird of West Muskerry ran a great race at under 14 level to take third position, with North Cork, led by James Patrick Boyce in 13th, taking second team.  The uneven ages are scheduled for Sunday week in Rostrevor, County Down, along with the National novice events. ( Results)