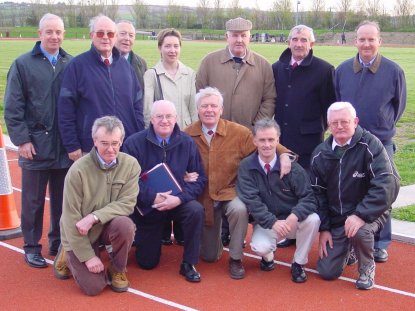 Planning for the 50th anniversary of the Cork City Sports, to be held on July 7th is well underway.  This year the sports will be held at the Cork Institute of Technology, only the second time the sports has been held outside the Mardyke.  The other venue was Pairc Ui Chaoimh during the construction of the track at the Mardyke.  Last week the members of the Cork City Sports Committee visited the CIT and were most impressed with the new facility there.  The track surface is well up to world standards, and, weather permitting, should produce some brilliant performances with Cork athletes Sonia O’Sullivan and Mark Carroll already amongst the line-up the event is sure to attract a big attendance.  The organisers have promised a programme of world class athletes, with all the top Irish athletes due to compete, many of them chasing qualifying marks for the World championships.  Australian athletes will again take part in Cork, with Craig Mottram likely to lead the team.  He had five seconds to spare over Daniel Caulfield in the 1,500m at the AAI Games in Castleisland last year, and later won the heat of the 3,000m at the World indoor championships, with Mark Carroll close behind.  And last month he was the first non African at the World cross country championships, finishing eight in the short course race.  It also looks likely that a big American team will take in the Cork meet as they tour Europe.  Photo shows the Cork City Sports Committee at the CIT track.