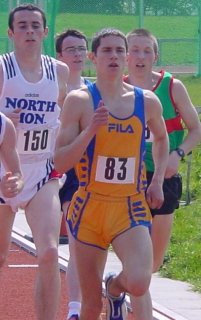 The Evening Echo South Munster schools track and field championships were held in ideal conditions at the Cork Institute of Technology track today.  Numbers competing were, disappointingly, down on last year.  This could possibly be a result of the long running teachers dispute, but more likely reflects poor recruiting of teenage athletes by clubs around the county.  For Sean Conroy of North Mon the championships marked the end of a very barren period indeed.  Plagued by injuries for a long time he signalled his return to fitness with a fourth place finish in the 1,500m at he Munster junior track and field championships the previous Monday.  On Saturday he moved down to the 800m, and tracked the leaders for the first 600m.  With 200m to go he moved up on the shoulder of the leader, Ian Donovan of Colaiste Choilm Ballincollig, and within a matter of strides he was in the lead.  Donovan tried to stay with him but never looked likely to catch Conroy who won in a time of 1:59.7.  Incidentally this was the first race win by Conroy, who hails from Bandon, in three years.  The intermediate boys 3,000m race was also a very close affair.  Mark Lehane of Hamilton in Bandon took the lead at the gun, with Jamie McCarthy of Kinsale CS tracking closely on his shoulder.  They maintained those positions until 200m to go when McCarthy tried to overtake.  Lehane was having none of it and managed to sprint the final 100m to win.  Earlier in the day McCarthy was third in the 800m behind Tadgh O’Callaghan of Colaiste Chriost Ri and James McCarthy of Midleton CBS.  Aoife McCarthy of Nagle Rice in Doneraile had a good win in the intermediate 3,000m, while Robert Wade of North Mon was in a class of his own in the final race of the day, the senior 3,000m.  Photo shows Ian Donovan (83) leading the 800m from eventual winner Sean Conroy (150) of North Mon.