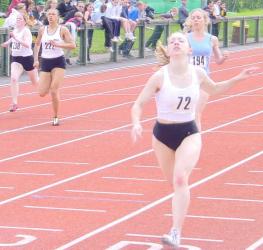 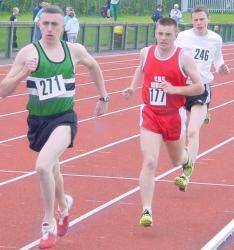 Leevale sprinters were in dominant mood at the second stage fo the Evening Echo South Munster Schools track and field championships at CIT on Saturday.
Aisling Maunsell of Colaiste Choilm was in top form, winning the senior 100m, 200m and 400m.  In the 100m she finished just ahead of clubmates Jessika Zebo and Sharon Kelly, while sharon and Jessika filled the minor places in the 200m.
Darren O’Donovan from Colaiste an Spiorad Naomh took the senior 100m/200m double, well clear of his rivals in both races.
Leevale sprinters also dominated the intermediate grade.  Orlaith McSweeney form St. Aloysius Carrigtwohill made it all look so easy in winning the 100m/200m double, with Orlaith Coughlan and Aileen Pomphrett second and third in the 200m, while they were third and fourth in the 100m.
The inter boys 200m was won in good style by Greg O’Leary.
Damien Dunlea from colaiste Chriost Ri returned to action after injury to win the inter 1,500m.  He took over the lead with 400m to go and stormed away from his rivals.
Mark Hanrahan only lost contact with the leaders in the senior 1,500m with 200m to go, but stayed on well to take third.  Considering he is two years younger than the winner Brian Farrell it was another great performance by him.
Deirdre Murphy from Colaiste an Phiarsaigh won the senior shot, with Fionualla Lombard a good second.
Best of luck to everyone in the Kit Kat Munster schools championships next Saturday.
(Photos)       (Results)