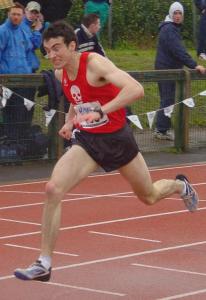 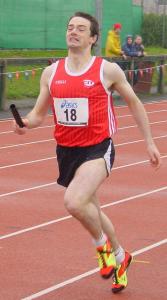 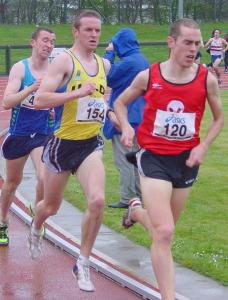 Leevale’s Brian Murphy, competing with UCC,was in terrific form on Saturday in the 400m at the Irish Universities track and field championships at CIT.  Running his first track race since last season he showed that much has changed since his last race.
It was good to see him getting involved in the race from the gun, well up with the leaders from the very start.  The second 100m was run into very strong wind and rain, but that took little out of him.  And coming off the last bend he was in front, with David McCarthy of UL on his outside chasing him all the way down the finish straight.  There was no catching him though, crossing the finish line in front in a time of 48.38, well inside his previous best.  In more favourable conditions there should be lots more improvement.
And Paddy O’Gorman made it a good day for Leevale with an excellent third place finish in a time of 50.67.  Running for CIT he also showed that there are a lot of faster times in the weeks ahead.
Fiachra Lombard, running for UCC took the lead after 200m of the 1,500m and held that position until 100m to go when he was joined by Eoin Cummins and Gary Murray, who both passed him after a great fight, leaving the Leevale man to finish a close third.
Photos; Brian Murphy on left; Paddy O’Gorman centre and Fiachra Lombard on left  (More Photos)