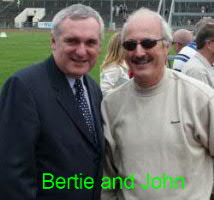 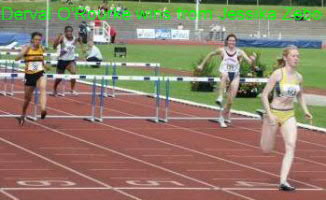 The national championships at Santry had every thing; brilliant races, brilliant performances; brilliant weather; and world records.  Big disappointment was the size of the crowd – on Saturday there seemed to be more Gardai than spectators.  Could a case be made to take the championships out of Santry – to Tullamore perhaps.
Mark Carroll, fighting hard to get race fit, arrived in Santry from Rome late on Saturday afternoon and was at that stage toying with the 1500/5000 double.  In the 5k mark was soon off on his own, lapping runners before halfway for an easy victory.  He had company for most of the race in the 1500, surging clear with 300 to go, and then holding off all challengers to complete the double he last completed three years ago (beating Niall Bruton in the 1500 by the thickness of his vest).
Incidentally, there was no runner from Munster in the heats of the 1500 on Saturday.  With a juvenile committee running the Munster Council things are not likely to change in the short term.
Former Leevale star Derval O’Rourke put in a fluent display of hurdling to win the 100m hurdles.  Drawn alongside her was Jessika Zebo who is following in the footsteps of Derval, and she was in superb form, finishing second in a new PB.
With former Irish high hurdles champion Seamus Power working on the technique side of things we can expect a lot more from Jessika.
Cathal Lombard took his place in the 10k on Saturday.  Seamus Power imposed his authority from an early stage getting away from the field.  A mile later Cathal surged into second place and was never challenged thereafter as he picked up silver.
Deirdre Murphy was again in great form taking bronze in the shot and discus.  However, her brother Brian was a disappointing fifth in the 400m, running well down on what he is capable of doing.
Neil Walsh was fourth in the triple jump, and new member Louis Wildenbouer picked up silver in the javelin.
Well done ot everyone who competed in the championships.  Well done also to Robert Heffernan who set another record in the 10k walk, and Sonia O’Sullivan who completed the 800m/5,000m double – the only other Cork athletes to win medals.