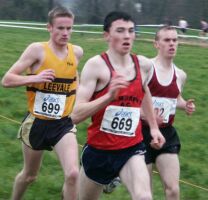 Dalgan Park in county Meath was the venue for the All Ireland cross country championships, catering for boys and girls under 12, 14, 16, and 18, with the national novice championships also decided.
Mark Hanrahan ran another excellent race at under 18 level.  He was fast away and was soon stretching them out with his front running tactics.  By halfway he was in a three man lead group along with Mark Christie and Andrew Ledwith, with a good gap back to the chasing runners.  Going out the final lap Mark was unable to stay with the other pair as they pushed the pace, and ran alone for the entire lap to finish a creditable third – victory going to Christie.
Mark continues to make good progress and it should not be too long before he closes on all others.
John Shine finished 34th, Richard O’Connor 65th and Aaron Hornibrook 69th.
Joyce Curtin from Glenbower was the only Cork winner of the day.  She won the under 16 title after showing great strength over the final uphill stretch to the finish.
Ciaran O’Lionaird of West Muskerry won silver in the under 16 race.  He lost nothing in defeat, only losing contact with the winner in the last 300m.
After a good season so far, Ian Donovan had an off day in the novice race, finishing well off what he is capable of.

Well Done to Fiachra Lombard for a great run in the European cross country championships in Croatia where he finished 26th.  And commiserations to Cathal who again missed out on a big event due to either injury or illness.