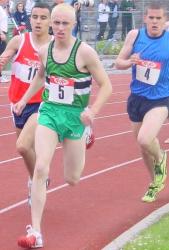 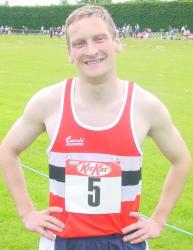 Apart from the wind, weather conditions at the Kit Kat All Ireland Schools track and field championships at Tullamore on Saturday were a lot more pleasant than the past few weekends.
With non-stop competition from 9 am to 6pm there was plenty for everyone to enthuse about.
Darren O’Donovan powered out of the blocks in both the senior 100m and 200m and was never headed as he claimed both titles – the first Cork athlete to achieve this feat in years.  And his winning time in the 100m of 10.73 means he qualifies for the World Junior T&F championships in Jamaica in mid July.  Nice trip!
Donna Hosford is having a great season in the long jump, setting PB’s in every competition.  And she was on track again on Saturday, winning the intermediate long jump with 5.59m.  Aileen Pomphrett was fifth with 5.29.
Kate Fitzgerald improved her performance in every round of the intermediate shot to record an excellent win
Jessika Zebo found one too good for her in the senior 100m hurdles, while Sharon Kelly finished a fraction behind her in third.
Niamh cremin was another to take bronze – in the senior 400m hurdles.
Damien Dunlea was probably recovering from a marathon session with the hairdresser on Friday, but still found the strength to take silver in the inter 1,500m, after blasting clear with 350m to go.
Greg O’Leary put in a tremendous finish in the inter 100m hurdles for an excellent silver.
Deirdre Murphy had to settle for the minor placings on this occasion – a good second in the shot and third in the discus.
Alan Foolkes followed brothers Trevor and Jason by taking a medal in the steeple – a well earned bronze.
Orlaith McSweeney won double silver in the inter 100m and 200m, with Orla Coughlan unlucky to place fourth in both.
Aisling Maunsell came up against one of the most talented quarter milers in the country in Joanne Cuddihy in the senior 400m, but did well to finish third.  According to Sean Naughton Joanne is going to be one of Ireland’s greatest.  And he’s a man who’s rarely wrong!
Mark Hanrahan ran a gallant race in the senior 5,000m to finish fourth in a strangely run race that obviously did not suit him.  However, he has another two years in this grade so time is very much on his side.  And one place behind him was Thomas Maunsell who is making steady progress at the distance.
Well done ot all the LEevale athletes who did so well at the highest schools athletics level.
Other Cork athletes to catch the eye included Ronan Foolkes who won the senior 400m hurdles; Nicole O’Regan who won the inter 300m hurdles and placed second in the 300m; and Katie Byrd who was second in the senior 400m hurdles.
St. Al’s Cork took the senior girls all round trophy.  A good day for Cork athletes.