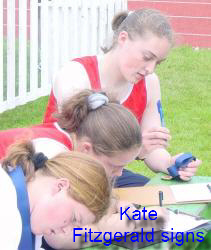 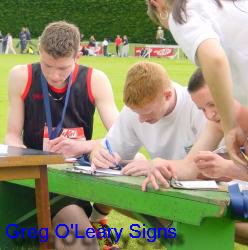 Another busy weekend for Leevale underage athletes saw the club well represented at both the Kit Kat Tailteann Games in Tullamore on Saturday, and the Lucozade Sport Munster underage championships at CIT on Saturday and Sunday.
At the Tailteann’s Donna Hosford was in top form once again, comfortably winning the long jump.  Practically every competition this year has seen her better her PB, and Saturday was no different as she jumped 5.63m, well clear of her opponents.   Aileen Pomphrett was just outside the medals in fourth with a best jump of 5.16.
Kate Fitzgerald is another who is on a winning streak, taking the shot with a best throw of 10.97.
Orla Coughlan had to settle for third in both the 100m and 200m, just a fraction behind the winner.  Spare a thought for Orlaith McSweeney who was unable to compete after injuring herself in the warm-up.
Greg O’Leary is fast approaching his season’s peak.  In the 100m hurdles he closed very fast to take second, clocking the same time as the winner Chris Condon from Tralee.
In the 1,500m there were five together with 200m to go, with Damien Dunlea in pole position.  However, he was run out of it in the last 100m after failing to overcome a few weeks on the injured list.
For most of the Leevale athletes it’s the schools international in Glasgow next month.
(Photos)