The Munster intermediate and underage championships were held at Spancil hill in clare on Sunday.  The course, on the side of a mountain, was one of the toughest ever provided for young runners.  One could only feel sorry 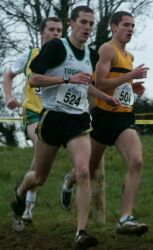 for the very young children competing, and the hope is that none of them will be put off athletics by the experience.
Another concern is that the championships were held just one week before the All Ireland’s, the most important race of the year for many.  There is no reason for not having a two week interval between Munster and All Ireland cross country championships.  This year the Munster Council changed the fixture lay-out to the detriment of the youngsters.  Let’s hope next year the athletes will be treated better.
Leevale’s Mark Hanrahan returned to racing after injury forced him to sit out the Munster under 19 championships.  Again he had Jamie McCarthy as his main opposition.  While they were evenly matched for the first of three laps Mark was just itching to get away, and he did so on the second lap, going on for another excellent win.  Colm Turner was third. Keith Linehan finished seventh, while John Shine and Aaron hornibrook ran on strongly to give Leevale team victory.
The intermediate men’s race saw Ian Donovan off to a good start, and, after a lap of the five lap race, he was in a lead group with Josh Palmer and Robbie O’Neill.  The trio stayed together for most of the race, but Palmer went for home midway through the last lap, opening a gap on Ian, who found it hard to close.  With 200m remaining Ian got down to sprinting, closing fast on the leader.  However, the line came a metre too soon, leaving Ian to settle for second, beaten a matter of inches.
An excellent run by Ian who is improving with every race
Alec Daunt was our only runner in the under 16 race, finishing 23rd – the hills proving too much for a guy in the sport only a short time. (More Photos)