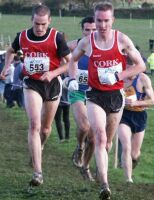 to Donoughmore today, with the local club doing a great job in organising everything.  In spite of all the torrential rain that fell in the general Cork area,  especially over the past week, the course held up well with just patches of mud, and plenty of running ground.
Leevale athletes were in excellent form.  The senior men’s race saw a breakaway group that included Fiachra and Cathal Lombard, Seamus Power and Mark Kenneally.  Cathal only decided yesterday to run after a virus earlier in the week knocked him back a bit.
Gong out the second of five laps the Lombards pushed the pace as both shared the lead.  However, half a lap later Power took control and simply ran away from the other three.  Fiachra gave chase, while Cathal and Kenneally shared third spot for a while before the latter pulled away.  Power was never threatened over the final couple of laps and won convincingly, with Fiachra a good second ahead of Kenneally and Cathal.
Martin McCarthy went to sleep for the first half of the race, staying well off the pace.  He came to life though in the second half and moved strongly through the field to sixth place.  Try as he might over the last lap he failed to catch Dermot Donnelly in fifth.
Padraic Buckley came off twenty five miles a week to place 25th behind Donncha O’Mahony (15th) and ahead of Brian McMahon (27th) to give Cork the team title for the first time since 1984!!  Padraic should benefit from the run and could be 4th man for Leevale in the inter club contest next March. 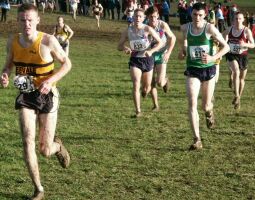 Mark Hanrahan ran another great race in the under 19/junior race.  Up with the

leaders from the gun he took the lead going out the second of three laps, stretching those behind him.  However, he was caught soon after by Andrew Ledwith, who in turn was passed by Colm Rooney and Mark Christie, leaving Mark Hanrahan in fourth, a position he held confidently to the finish.  A break from training due to injury probably cost him a higher place finish.
Up front Rooney ran on strongly to win, while Christie never threatened the winner to take second and Ledwith third.  Other Cork finishers saw Fergus Meade 15th, Jamie McCarthy 16th, Diarmuid Collins 22nd, Thomas Maunsell 29th, Tadgh O’Callaghan 30th, and James McCarthy 38th.
Ann Keenan Buckley took control of the women’s race after a lap and then made it a procession to the finish as she won in great style.  Valerie Vaughan was up with the leader early on but faded to finish fifth, leaving Maria McCambridge to battle for a good second ahead of Sinead Delahunty and Annette Kealy.  Louise Cavanagh had a good race for 8th, with colette O’Riordan 11th and Rhona Lynch 14th.  Carmel Parnell had another excellent race to finish 19th.
Fionnuala Britton was never really challenged as she won the junior race impressively.

Damien Dunlea took the lead from the gun in the under 17 race and shared the lead with James King and Colin Costelloe for most of the race.  Little or nothing separated the three throughout.  With 200m to go Costelloe took the lead, but Dunlea immediately battled back to re-take the lead.  Costelloe, however, regained the lead in the last 100m, and despite a great finish from the Leevale man, held on to win.
John Shine was next best for Leevale in 19th, Keith Linehan 31st, Alec Daunt 69th, Aaron Hornibrook 94th, and Richard O’Connor 98th.  Leevale finished second team.
Ciaran O’Lionaird had another excellent run to take second in the under 15 race, while Joyce Curtin filled a similar position in the under 17 race.
Overall it was a satisfying day’s athletics