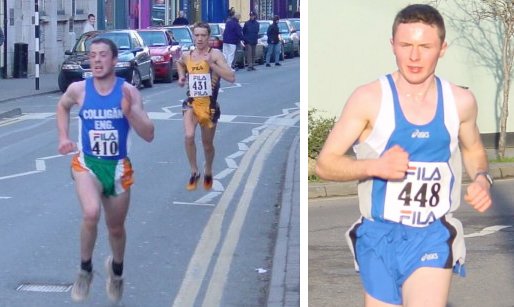 William Harty was a winner at the Bandon 5m Road Race today.  Harty   (410 in photo) led most of the way to win in 24:38, with Leevale’s Martin   McCarthy (431 in photo) second in 24:41.  McCarthy, who has been steadily   returning to form of late, had a temporary set back in December with an ankle injury.  Photo shows Harty approaching the finish line, followed closely by Martin.  William’s brother Philip was third in 25:19, while Leevale’s James Grufferty (448 in photo) finished a distant fourth in 26:49.  This was Grufferty’s last race in Ireland before heading to East Tennessee tomorrow to take up an athletics scholarship.  All at Leevale wish him well!  Paul Levick from Bristol was fifth.  Carmel McCarthy of Bandon won the women’s event in 28:44, with Leevale’s Claire Gibbons second in 30:47, and Mary Sheehan third. (Results ).