October 13th 2002.  Mark Hanrahan wasn’t long putting last week’s defeat by Jamie McCarthy behind him.  Competing in the under 18 race at today’s underage cross country championships at Ballinahina both of them were quickly on their own at the head of the field.

For much of the race little separated them.  However, with some 1,500m remaining Mark edged ahead.  On this occasion Jamie was unable to respond, leaving Mark on his own in the lead, a lead he confidently held to the finish.  Both have had an excellent track season and will be strong contenders for the big races later in the season.
Keith Linehan had another good race to take third, with Richard O’Connor, Aaron Hornibrook and Alan Sexton combining to win the team prize.
Ian Donovan, running his first cross country race in two years, took the lead from the gun in the novice race.  However, he was caught by Pa Murphy of Togher with a lap to go and had to settle for second, a good performance in the circumstances. Susan O’Reilly was 10th.
Jason Nicholl was a good fifth, with Eric Skillington 11th and David O’Dwyer 28th, giving Leevale third in the team contest.
In only her second ever cross country race, Linda Coade came from way off the pace in the closing stages for a brilliant second place in the women’s novice.  Club members might remember her more famous brothers Stephen and David. 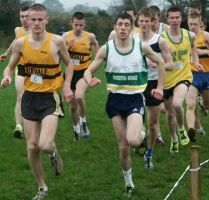 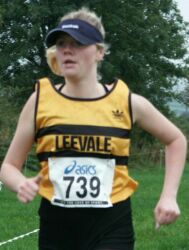