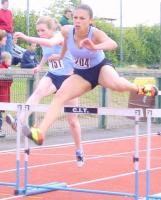 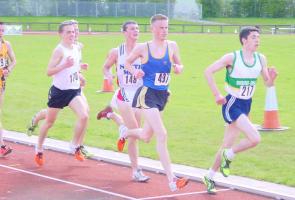 A perfect sunny day at CIT saw some excellent performances by Leevale athletes at the South Munster Schools Track and Field championships.
Performance of the day was probably shared between Mark Hanrahan and Jessika Zebo.
Mark has been showing signs of a breakthrough in recent races, finishing there or thereabouts in his track races.  Yesterday the 3,00m was his choice.  From the start he settled in the main bunch, tracking Jamie McCarthy from Kinsale CS, with thomas Maunsell also well placed.  With three laps to go Peter Dalton of the Mon moved up to the lead, without overtaking McCarthy.  With two to go McCarthy was back in control, with Hanrahan tracking him.
Going out the last lap it was Hanrahan and McCarthy who were away from the field, led by Maunsell.  With 200m to go Mark started to sprint and was quickly away from Jamie, while Thomas was only overtaken by Mark Lehane with 150m to go.  And the bonus was PB’s all round!  Great running lads.
The senior 100m hurdles featured a ‘duel’ between Jessica Zebo and Sharon Kelly.  The Leevale pair got off to a great start, and were together until two out when Jessika edged ahead, going on for a super win.  Hurdling style by both was fluent and perfect .
Greg O’Leary also impressed in the inter hurdles, while Deirdre Murphy won the senior discus; Donna Hosford won the inter long jump; Darren blower won the senior shot.
Great performances all round.  Well done to all who took part.
(Photos)      (Results)