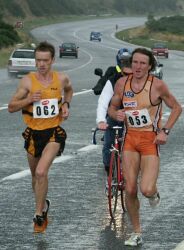 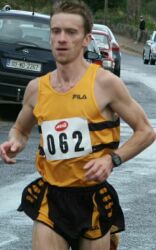 Leevale’s Martin McCarthy lost no time going to the head of the field in the annual Avia St. Finbarrs half marathon.  A new course was used this year, starting and finishing in Blarney.  A downpour around the halfway mark spoiled the day for spectators especially.
McCarthy was joined in the lead by Austrian Peter Wundsam who was in Ireland for the wedding of Una English.  He has competed for Austria in world and European cross country championships and hopes to do so again.
The two leaders ran side by side for seven miles before McCarthy took off, quickly opening a big gap on the Austrian, and winning in a time of 67:34.  wundsam was second in 68:12; John Griffin third in 70:21; Robert Purcell fourth in 71:10; and David Kelly fifth in 73:18.
McCarthy intends competing in the European and World cross country championships before deciding on whether or not ot run the London marathon.