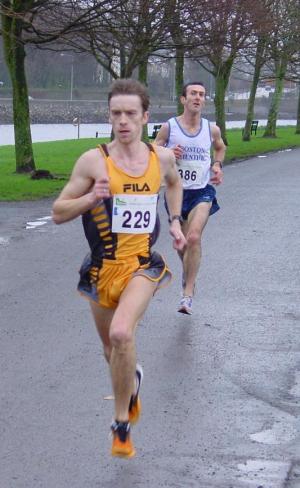 Last Sunday morning was cold, wet and windy, but proved no deterrent to more than two hundred and fifty participants in the Cork BHAA four mile road race over the Marina circuit.
After a mile of the race Martin McCarthy was leading, with Gerry Ryan, who made the journey from Galway, alongside.  At that stage they were edging away from a group of four, John Barrett, George Murray, Darren Keenan and Brian McMahon.  Half a mile later the two leaders were away on their own, battling against a strong wind.
Shortly after the three mile mark McCarthy upped the pace, but could not shake Ryan, who took the lead with 200m to go.
However, a surge from McCarthy brought him past Ryan in the last fifty metres for the win.  George Murray battled on to take third ahead of John Barrett.
Mary Sheehan continued her winning ways with a good win over Claire gibbons in the womens section, with Colette O’Riordan third.
(Results)

The annual Eagle athletic club five mile road race  was held in Carrigaline today (17th Feb) in reasonably good running weather.   As ever the Harty brothers took an immediate lead an opened a good lead on  the rest of the field.
By halfway William was moving away from Phillip, with Cathal O’Connell moving away from Alan O’Shea in third.  Over the last mile and a half O’Connell passed Phillip, but made no impression on William who won in a time of 25:16 – thirty seconds ahead of O’Connell.
Leevale’s Derek O’Leary was 6th (27:20), with Damien Collins 10th (28:10) and Padraig O’Dubhgain 11th (28:12).  Aaron Hornibrook won the junior prize (32:33), while Carmel Parnell easily won the women’s race in a time of 30:16.