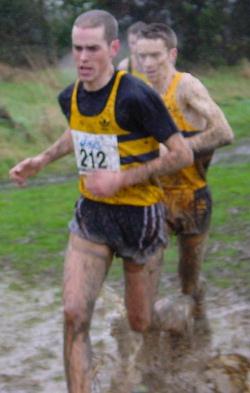 There might have been many complaints about the mud and rain at the Aer Lingus sports complex near Dublin Airport on sunday, but nothing could possibly detract from the magnificent performance of the Leevale trio of Cathal Lombard, Fiachra Lombard and Martin McCarthy.  As the saying goes ‘Twas the same for everyone!’
Both the Lombards have been keeping a low profile since disappointing performances in the Inter Counties before Christmas, the result of over training on a training trip to Kenya.
When Peter Matthews took the lead shortly after the start Cathal and Seamus Power were the only ones who gave chase.  Power eventually got away from Cathal, leaving the Lombard elder out on his own with a long way to go.
Behind him Fiachra established himself in fourth, while Martin overtook Paul McNamara to join him.  From there to the finish the pair kept each other company, although Fiachra did manage to open up a few metres of a gap now and again.
All three Leevale runners showed tremendous courage as they battled through the mud and rain.  Cathal was in inspired form and finished third, just twelve seconds behind second placed Power, while Fiachra got away from Martin in the last 100m for fourth.
While these guys were battling it out up front all eyes were on the fourth man in the team contest.  And here Cillian O’Tuama, besieged by injuries throughout the season so far, came through strongly for 59th position, with Damien Collins not far behind in 73rd place.  It all added up to an excellent third team placing.
And it could all have been so much different!  One of the most promising runners in the country, Bryan Keane, was an interested spectator.  The recently crowned Irish Universities Mountain Running champion would have loved the conditions, but would appear to be concentrating on finding the most suitable hair style for himself !!  This time round it’s the Mohican type !
Should be interesting to see if Fiachra and Martin will be selected for the long course at the World championships.  With just inches separating the two of them it would be a pity if the selectors deemed that someone who didn’t even bother running the trials should be on the team before them.  That would be controversial.
The Leevale juniors were so close to collecting medals, finishing fourth, led by Mark Hanrahan in 13th, with Alan foolkes 19th, Thomas Maunsell 27th and Sean Casey 28th.
Our sole representative in the women’s race was Claire Gibbons who finished 25th.