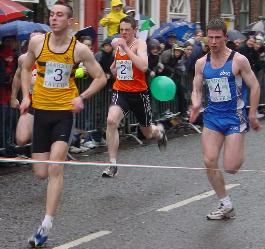 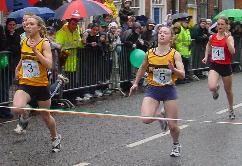 The Market Tavern sponsored races to find the Fastest Man and Woman in  Cork went ahead in terrible weather at the start of the St. Patrick’s Day Parade on Sunday.
Remarkably there was only one false start in each race, an indication, perhaps, of the weather conditions.
Sharon Kelly from Leevale was fastest away at the start of the women’s race, and she maintained her form to win well in a time of 7.7 seconds.  Sharon recently received a national award for her achievements on the track last year.  Aisling Maunsell from Leevale was second (7.8) with Louise Nicholson from Limerick third (8.1).
Jer O’Donoghue from Leevale was an easy winner of the men’s race, not surprising considering he set a new under 23 indoor record for 60m recently.  He had a winning time of 7.1, with Maurice O’Donoughue from Carrick on Suir second (7.2), and Darren O’Brien of UCC third (7.3).
All competitors expressed themselves well pleased with the event, as did chief organiser Martin Lynch.