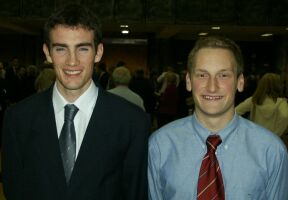 Two Leevale runners received Sports Scholarships when University College Cork made presentations to forty Sportspersons at Aras na Mac Leinn.  Since 1992 400 students have benefited from an investment of nearly €570,000.
Brian Murphy and Darren O’Donovan donned collar and tie (a big change from the scruffy running gear!) to receive their grants from President of UCC Professor Gerry Wrixon.  They have the distinction of becoming the first sprinters to receive awards – it is more usual to select middle distance runners! – and also it is the first time that two from athletics have been honoured in the one year.
Both have given years of service to Leevale, with Darren claiming to have a lengthy 12 years of experience in athletics already.  Anyone remember the first day he arrived?
In athletic terms Brian has concentrated on the 400m in the past few years after aborting his attempts to become the first athlete to be selected for Ireland in the triple jump and 400m.
Darren on the other hand has concentrated on the sprints, 100m and 200m, although he has been known to run the occasional 400m.
Both have won medals at national level and both have represented Ireland in international competition.
As part of their terms of acceptance both swore the Oath of Allegiance to the Skull and Cross Bones!!
It is a matter of concern that both beat a hasty retreat when the suggestion was made that the cheques should be cashed in the Student Bar, leaving a couple of thirsty coaches wondering what the world has come to.  (More Photos Click Here)