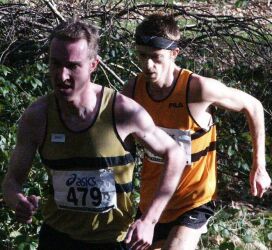 The superb grounds of Avondale House in Avoca may have been very scenic but there were surely very few of the competitors who took time to admire them!  Weather conditions were excellent with beautiful sunshine hinting at what lies ahead.
Leevale athletes ranked amongst the pre race favourites in the senior men’s race, with little to choose between Martin McCarthy and Cathal Lombard.  The first couple of laps saw a big group of runners at the head of the field, with the two Leevale guys sitting in the bunch, watching…..and waiting…..
The third lap saw Cathal take the lead, a lead that soon had all but Martin and Noel Berkeley in attendance.  Going up the hill for the fourth of six times Noel was in trouble, and had to leave go of the leaders.  Cathal continued to lead, but, even at that stage, the result looked set to go in Martin’s favour.
Going out the last lap Martin took over the lead and went on to record his first senior title, with Cathal not too far behind in second.  An outstanding performance from both.  Roy Fahy, Cillian O’Tuama and Damien Collins made up the Leevale team. made up the team
The 1-2 finish evoked memories of Donie Walsh and Ray Treacy in the 80’s.  Then, and again yesterday, Leevale failed to avail of the top finishes to win the team contest.  There have been two excellent opportunities to win the team medals, last year and yesterday, but it was not to be, leading to a certain amount of disappointment.
Claire Gibbons ran the race of her life in the senior women’s race to finish an outstanding fourth.  She held back a little at the start, but was soon making her way up to fourth, racing confidently throughout the race.
Ann Keenan Buckley ran another extraordinary race to win impressively.
The junior men’s race saw Mark Hanrahan race into the lead from the gun.  Again he tried to push the pace and was doing a good job of it until he hit a bad patch at halfway, forcing him to drop back.  It took a while to recover, but recover he did to finish an excellent fifth.
Damien Dunlea had a super race considering his lack of fitness and finished 11th, with Thomas Maunsell, Keith Linehan, Sean Casey, John Shine, Richard O’Connor and Aaron Hornibrook combining to give Leevale third place team medals.  The race was won by Mark Christie who gave a superb display in the process.
Well done to all the Leevale runners.  And special congratulations to DSD on winning all four team titles on offer.  Surely an achievement for all clubs to aspire to.  When you consider the number of clubs in Ireland, and think about the number who could not even have one team in any of the races, you begin to appreciate the enormity of winning all four.  Well done DSD.