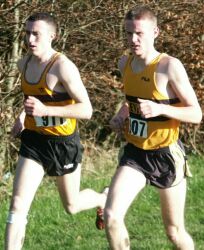 Mark Hanrahan continued on his winning ways on Sunday with another excellent win in the Munster junior cross country championships.  As ever, St. Augustine’s College grounds in Dungarvan was in super shape.
Mark was accompanied for the first 2k of the 6k race by Damien Dunlea, runner-up in the under 17 Al Ireland before Christmas.  Both quickly opened a lead on the Clare pair of Sean Hehir and colm Turner, with Mark setting the pace.  Damien stayed with Mark for the first 2k before yielding to the leader’s strong pace. After that it was just a case of how much Mark would win by, and 32 seconds was a good effort.  Incidentally, this was Mark’s first time beating Damo!
With first and second over the line, Leevale won the team contest thanks to good backing from John Shine, Alec Daunt and Aaron Hornibrook.
The senior women saw another great performance from European over 45 5,000m champion Carmel Parnell.  She battled strongly all the way to finish fourth behind Louise Cavanagh and Colette O’Riordan.
Roy Fahy was best placed of the senior men in 11th place, with Ian Donovan 13th, and Cillian O’Tuama 18th.  Club secretary Liam Horgan completed the scoring team who finished fifth.  Former Providence College scholarship student Dermot Galvin scored a runaway victory from James McIntyre and Brian McMahon of Carraig na bhFear.
Orla Drumm and Joyce Curtin ran together for a while before Orla surged clear to win the junior race impressively.(Results)