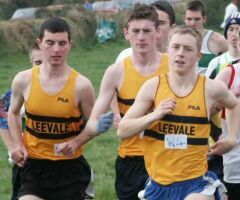 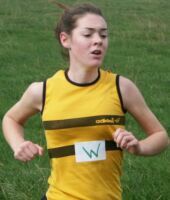 The second stage of the Cork cross country championships were held at a bitterly cold Carraig na bhFear last Sunday.  Once again there were some excellent performances, including three individual wins.
Denis O’Sullivan got the day off to a flying start in the under 10 race.  Taking the lead from the start he stayed on strongly and won a good race with Gearoid Finn from Riverstick Kinsale second, while Sean Fogarty also impressed with a sixth place finish, and Darragh Healy finished behind.
The under 14 race saw Brian Manning well placed with the leaders from the start.  By halfway it was Richard McCarthy from North Cork in the lead, with Brian tracking him a few metres behind.  With about 400m remaining Brian closed on the leader and surged into the lead, sprinting all the way to the line for an impressive win.  Newcomer Michael O’Keeffe in only his second race also ran well.
The third win of the day came in the under 16 race.  By the end of the first lap Ciaran O’Lionaird and Shane Cotter from Glenbower were clear of the rest of the field as they ran together.  However, Ciaran was on his own soon after and coasted to a clear win.  Behind him there were superb performances from John Collins, Denis Metcalfe, Thomas O’Sullivan and Brian O’Connell who combined well to earn second team medals.

At the end of the first lap Keith Linehan was the leader in the under 18 race, closely tracked by John Shine.  A lap later the only change saw Timmy O’Donoghue of Glenbower take over the lead, a lead that increased all the way to the finish.
As the race progressed John and then Keith was over taken by Peter Fennell of Togher, eventually finishing third and fourth.  Good packing from Alec Daunt, Richard O’Connor and Aaron Hornibrook was good enough to give them team victory.
Caroline Murnane, Jennifer O’Lehan, Shauna Fagan and June Linehan were the club reps in the under 10 race, with Susan Peters, Stephanie McCarthy and Fiona Burke ran under 12, and Jack Reynolds was the sole rep in the boys under 12 race, while Aisling Geary was seventh under 18.
Susan O’Reilly was third in the novice race for a long way before being passed in the closing stages and had to settle for fourth place.
Robert Baer, having his first race in a long time, was well short of race fitness in the men’s novice race, but will improve as the season progresses.
Well done to everyone who competed.
The Munster championships take place next Sunday at Rathgormuck county Waterford, a venue set in the foothills of the Comeragh mountains.  Incidentally, club secretary Liam Horgan knows the place extremely well as he was married in the local church!! (Results) (More Photos)