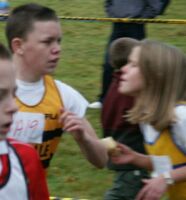 Ciaran O’Lionaird was in flying form at the Munster cross country championships at Killarney last Sunday.  Held on a reasonably flat course in brilliant sunny weather conditions Ciaran added the under 16 to the under 17 title he won two weeks ago.
He shared the lead with David McCarthy and Brian Markham in the early stages, with Markham the first to feel the strain as he dropped off the lead.  Going out the final lap Ciaran upped the pace and succeeded in opening up a small lead on McCarthy, a lead that increased all the way to the finish and another good win.
John Shine, Keith Linehan and Alec Daunt were all well placed in the early stages of the under 18 race, with John eventually finishing a good 7th, followed by Keith in 11th and Alec 13th.  Richard O’Connor and Aaron Hornibrook made up the scoring team that finished second.  Incidentally, Damian Dunlea, running his firs race since March was forced to drop out, suffering from a chest infection that is taking longer than usual to clear up.
Brian Manning and Michael O’Keeffe ran the under 1 race, and, here again, Brian was just out of bed after a bad dose of flu.  He still managed to finish 14th in spite of the set-back.
Denis O’Sullivan ran another super race to win the under 10 race, while Sean Fogarty was also in fine form to finish 10th and Darragh Walsh was 28th.
Overall, very good performances all round.  (Photos)  (Results)