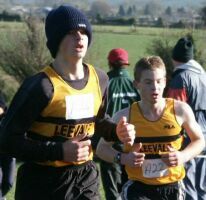 The Munster cross country championships were held at Rathgormack last Sunday, on a course situated in the shadows of the Comeragh mountains.  The weather stayed fine but for a couple of showers, while the wind could have been a lot worse!
Ciaran O’Lionaird set the early pace in the under 17 race, with Alec Daunt well placed amongst the leading group.  Strong front running by Ciaran soon had the group down to two, himself and Cathal Hannon from Limerick, who briefly took the lead around the halfway mark.
Ciaran was back in front soon after though and gradually opened up a lead that he maintained all the way to the finish for a fine victory.  Alec faded a little in the closing stages and finished tenth.
Keith Linehan and John Shine tried hard to stay with the leaders in the under 19 race, but found the going tough.  John proved the stronger, staying on strongly to finish 6th, with Keith two places back. Richard O’Connor was 14th and Aaron Hornibrook 22nd to give the team second place without the services of Mark Hanrahan who  was racing in Belgium, where he finished 20th (22:48 for the 6.8k race).
The ‘flu had a big effect on the under 15 team with John Collins sidelined and unable to race.  Denis Metcalfe, just over the bug, ran well below par, with Brian Manning and Thomas O’Sullivan running well enough.  Hopefully all will be fit for next Sunday. (Photos)  (Results)