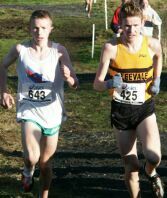 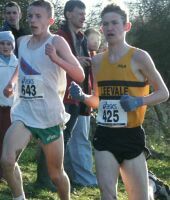 Brilliant sunshine, an undulating course, and great races.  That just about sums up the national cross country championships at Belvedere House in Mullingar yesterday.
Dual Munster champion Ciaran O’Lionaird had high hopes of winning the under 17 title after a string of impressive performances throughout the season.
Allowing the early pace to settle before moving to the front, it wasn’t long before he established himself at the head of affairs, with DSD’s Brendan O’Neill alongside for company.  The pair battled strongly in front, and succeeded in moving right away from the rest of the field.  With 400m to go Ciaran went for home and finally got away from O’Neill, winner of the schools international in March.  It was a hard won victory for Ciaran over a runner who lost nothing in defeat.
Alec Daunt continues to improve, and his 36th place finish ranked him as 8th from Munster.
Mark Hanrahan had high hopes of making the medals in the junior race, but was never at the races, putting in a performance that was totally out of character for him, with a 16th place finish (11th under 19).  Jamie McCarthy was back in the mid-teens alongside Mark with a lap to go, but put in a terrific finish to place 5th and a place on the Irish team for the European cross country championships.
Keith Linehan ran much better than recent races to finish 33rd (26th under 19), and he was followed home by Thomas Maunsell in 48th, John Shine 49th, Richard O’connor 60th and Aaron Hornibrook 74th.  The under 19 team was 4th.
The senior races were dominated by Seamus Power and Rosemary Ryan who had outstanding wins, while Cillian O’Tuama was the club’s only rep, finishing 37th.  (Photos)