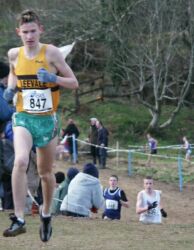 Sun, sea, sand and sweat!  An apt way to describe the national cross country championships at Killybegs on Sunday.  It must be the first time ever for a cross country event to be held that encompassed all the above ingredients.  And there were even a few muddy patches thrown in for good measure!  But overall the course was a fair test of the athletes.  Only disappointment was none of the athletes availed of the washing facilities offered by the Atlantic ocean!
After a hard fought victory in the under 17 All Ireland two weeks ago, Ciaran O’Lionaird was the strong favourite to add the under 16 title.  But, with Brendan O’Neill of DSD again in the line-up another tough race was in prospect.
Ciaran was well away, leading the field at the end of some 400m of Killybegs beach.  Then it was up into the dunes for the real race.  By the end of the first lap the individual medals looked sealed as Ciaran, Brendan, and David McCarthy from West Waterford eased themselves away from the rest of the field.  Little separated them throughout the race, which was all the time building up to a sprint finish.  And, so it was, with Ciaran surging into the lead with 400m remaining, without any reaction from his rivals.    And, he was able to ease down well before the line and enjoy his achievement. 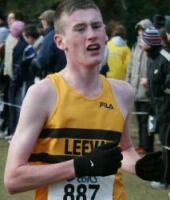 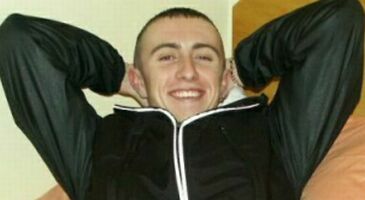 Damien Dunlea, who has not raced since the Irish schools in March, apart from the Munster championships that he failed to complete through illness, signalled his return to racing in the under 18 race.  Clearly unfit, he was well up at the start, but lack of fitness saw him drop back to finish 14th.  John Shine also got away fast and ran a solid race throughout to finish 18th, and will improve on that performance.  Richard O’Connor, who made a name for himself on the bus on the return journey, was 66th after being well placed for much of the race.  Keith Linehan, however, was never at the races, and ran well down on previous form in 69th, with the team placing 5th.
Illness prevented a couple from competing, but those who did travel enjoyed the experience and the novel course over the sand and dunes of Killybegs.
(Photos)