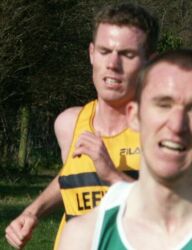 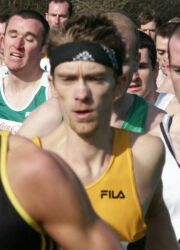 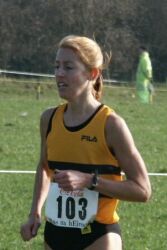 Congratulations to the organisers of the annual Coca Cola Ras na hEireann in Dunleer county Louth yesterday.  The event was superbly organised, and, together with the bright sunshine and firm underfoot conditions, made for some excellent racing.  The course was also superbly manicured, the result of grazing sheep!!
Martin McCarthy and Brendan Fitzgibbon represented the club in the men’s race.  Martin was attempting to follow up on his great win in the long course championships two weeks ago, while Brendan was only having his second race since last April, and his first cross country race in over two years.  Fiachra Lombard had to withdraw from the Ras at the last moment due to a viral infection.
Both Leevale runners were well in contention with top ten positions at the halfway mark, with Martin running shoulder to shoulder with the leaders.  However, as the race progressed he became detached from the top four, led by Dermot Donnelly and Robert Connolly, with Graeme Reid and Dan Wilson tucked in behind.  Donnelly continued to push the pace but was outsprinted in the closing stages by Connolly who won decisively in the end.
Martin was outsprinted by Cain Williams, both given the same time, to finish sixth and third in the Irish championship event, while Brendan drifted in the closing stages to finish 19th.
Claire Gibbons tried hard to go with the pace in the women’s race but was outsprinted from the gun.  Ann Keenan Buckley continued her remarkable success story by leading form the start, with only Valerie Vaughan and Freya Murray for company.  They were duly dropped in the closing stages, with Valerie having an excellent race to finish third and automatic selection for the World cross country.
Ras organisers can feel justifiably satisfied with their event that attracted big fields in all the races.   (Photos)