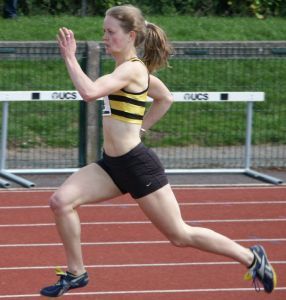 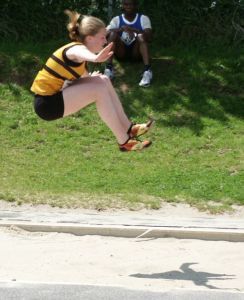 After the hectic day at the Kit Kat All Ireland school championships there was a much more relaxed atmosphere at the Cork senior track and field championships at CIT on Sunday.  Bright sunshine throughout, although a strong wind kept temperatures down.
Leevale sprinters were out in force with Ailis McSweeney recording a super double in the 100m and 200m, a feat repeated by former Leevale runner Darren O’Donovan.  Amy Clarke picked up silver in the 100m and bronze in the 200m, although she also failed to register a mark in the long jump.
Aisling Maunsell returned from Western Kentucky won the 400m, while Niamh Cremin was second in the 400m hurdles with Susan O’Reilly third.
Deirdre Murphy won the shot and discus, and Carmel Parnell was second in the 1,500m.
Sean Manning, on the eve of his departure to Tanzania for med school training, was second in the 100m ahead of Paddy O’Gorman, with the minor places reversed in the 200m.  Best of luck to Sean in Africa – no doubt training will benefit from the facilities there!!
Joe Nagle had a good win in the shot and made it a double in the 56lb, while Paul O’Flynn was in action again to win the long jump, and was later part of the winning Leevale relay team, a position also gained by the women’s team.
(Photos)