Leevale athletes were in great form at the Munster senior championships held at CIT on Sunday last.  Weather conditions were excellent with no wind problems.  However, a downpour, the only one of the day, came just at the wrong time.  Just as the women were about to settle on their blocks for the 100m final the heavens opened, sending everyone scurrying for cover.  The race went ahead, but, unfortunately, the electronic timing did not.  The race was re-run later on and resulted in a comfortable win for athlete in form Ailis McSweeney, with Orla Coughlan second and Donna Hosford third.
Ailis later completed a double with another win in the 200m, her 24.45 a new PB, with Orla Coughlan again second.
Paddy O’Gorman went off fast in the 400m and looked strong as he crossed the line ot win well. 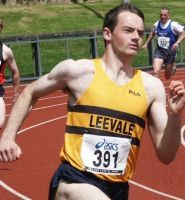 In the women’s 400m Aisling Maunsell and Susan O’Reilly won silver and bronze respectively.
Jer O’Donoghue won his heat of the 100m comfortable, but then withdrew from the final due to injury.  Darren O’Donovan won the final, with Carl McNamara second and a dead heat for third between Darren Coughlan and Darren O’Brien.  Carl was later second in the 200m and fourth in the long jump.
Leevale won both sprint relays, and won silver in the women’s 4x400m.
Donna Hosford won the long jump, Deirdre Murphy won the shot and was third in the discus, Damien collins won the steeple, and PAul O’flynn was second in the long jump to complete an excellent day for Leevale.
Congratulations to Ailis McSweeney on her selection on the Irish team for the Europa Cup, and also to Cathal Lombard who has been selected on the men’s team.  However, one must question the non selection of Fiachra Lombard whose 8:03 for 3,000m a couple of weeks ago should have made him the obvious choice for the 3,000m spot.