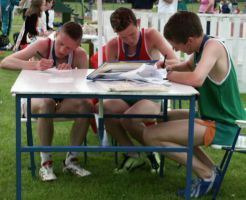 It was a great weekend for Leevale athletes Ailis McSweeney, Cathal Lombard and Kathleen fitzgerald.  At the Europa Cup match in Finland Ailis, who travelled as a member of the 4x100m relay team, also took part in a special series of 100m races.  Running the first of three races she finished fifth in a time of 11.74, which is a new PB, but would also have been inside the qualifying standard for the European under 23 championships only for the wind.  Unfortunately, it was +4.3, so her time is not acceptable.
However, now she knows what it is like to run that fast and should be more than capable of matching it, or bettering it, in more favourable conditions.  The BUPA Cork City Sports is her next race next Saturday week.  Incidentally, the new track has been laid and athletes competing at Cork City Sports will be the first to race on the new surface.
Cathal Lombard, on his first track international, acquitted himself very well at the Europa Cup match in Denmark.  Competing in the 5,000m he finished a creditable second in a slow tactical race, and now 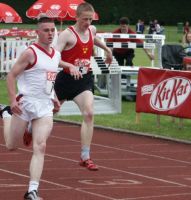 looks forward to racing over 10,000m on Saturday week.
Well done also to Derval O’Rourke who again lowered her Irish 100m hurdles record with a third place finish and to Freda Davoren who was third in the 1,500m.
Kathleen Fitzgerald is fast building a reputation for herself in the shot.  Competing at the Kit Kat Tailteann Games at Tullamore on Saturday she had a best of 11.58m, over a metre better than her nearest rival.
Karl McNamara finished second in the 100m, third in the 200m and fourth in the long jump – a stagger some thirty metres form the finish of the 200m nearly saw him fall flat on his face, but he recovered.  It surely affected the result.
Donna Hosford led all the way in the long jump only to be overtaken in the very last round, and had to be content with third.
Orla Coughlan finished third in the 200m after a fifth place finish in the 100m, while Ciaran O’Lionaird was overtaken in the last 80m of the 1,500m and also had to be content with third.