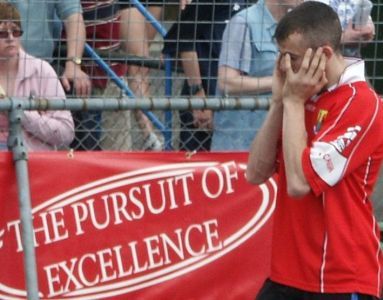 Greg O’Leary was in brilliant form at the Kit Kat All Ireland schools track and field championships at Tullamore Harriers Stadium on Saturday.  And he was not alone in that regard as Leevale athletes recorded some outstanding performances.
Once again the All Ireland schools lived up to it’s reputation as the best day’s competition of the year for underage athletes with top of the bill performances in practically every event from the first at 9am to the last at 6.15pm.  And every event went off right on schedule to the credit of the organisers. 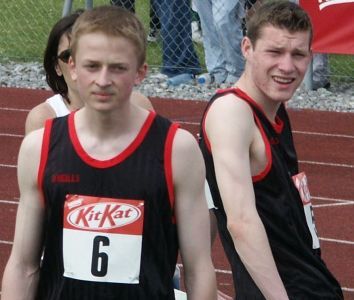 Greg O’Leary dominated the intermediate sprints, even though there was a big doubt as to whether he would actually make it to the starting line at all.  Three days in bed during the week due to illness would have relegated a lesser athlete to the sidelines, but, not alone did he make it to the start for one event, he also battled hard to complete three events, much to his credit.
The 200m came first and here he was always in control as he won impressively.  The 100m was a different affair as six athletes crossed the finish line together, almost.  The finish judges, of whom coach John Sheehan was one, selected Carl McNamara as the ‘winner’.  When the photo finish result arrived the judges were  amazed that Greg got the verdict, with Carl third, and immediately asked for a re-check.  The photo was re-examined in detail and found to be correct, giving Greg an incredible double, while Carl, whose effort could not be faulted, having to settle for third, the same position he had in the 200m.  An outstanding performance from both. 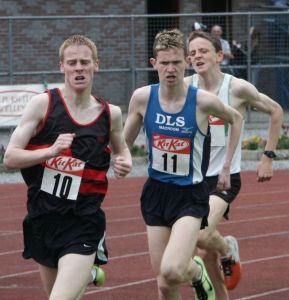 Later in the day Greg was on track again to anchor Glanmire CC in the relay.  Coming from behind he again battled hard to bring his school to victory, the first by Glanmire at this level.  Leevale’s Derek Duff also played a big part in the win, as did prospective members Kevin Gilmartin and Kieran Weir, along with sub Paul Hogan. 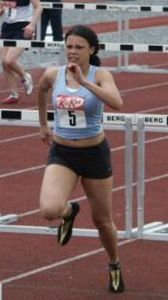 Kathleen Fitzgerald added another schools title to her amazing list with victory in the intermediate shot.  she led throughout the competition and won with a throw of 11.32m.
Jessika Zebo put her Leaving Cert studies behind her for the day to win silver in the senior 100m hurdles, but could ‘only’ manage fifth in the 100m.
Orla Coughlan came up against a strong field in the intermediate sprint and finished fourth in the 100m and fifth in the 200m.
Donna Hosford was unlucky in the intermediate long jump, leading throughout only to be overtaken in the last round.
Paying the penalty for being a few weeks overage Ciaran O’Lionaird battled hard in the intermediate 1,500m and was in contention for second until 50m from the line, only to be overtaken to finish fourth.  John Shine ran well to take seventh.
Paul O’Flynn was a little off last week’s 6.94m form in the senior long jump.  A fall early on that injured his arm probably played some part in his third place finish
Well done also to Orla Barry who had a great treble, 100m, shot and discus in the wheelchair section.  (Photos)
( Results)