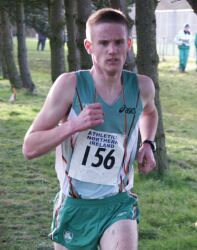 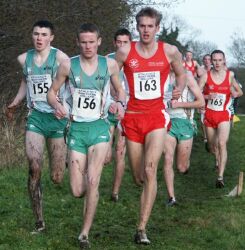 Mark Hanrahan’s outstanding run of success in recent weeks continued yesterday with victory in the Celtic International cross country held at the University of Ulster at Jordanstown, Belfast.
A cold sunny day was the least of the runners worries as soft underfoot conditions made the going tough for all.  The forecast rain fortunately did not materalise.
Running in the Ireland vest for the very first time, Mark, as usual, tried to set the pace.  A couple of Welsh runners had other ideas though, making their way to the front.  That lasted just half a lap though as Mark made his way to the lead.  By the end of the first of four laps Mark and Andrew Ledwith were alone in the lead.  Little separated them as they battled wind and mud for the next two laps.  Going out the last lap there was little to indicate who would win, as they were so close together.
All that changed some 400m into that final lap as Mark pressed the button and, in a matter of strides, the race was over.  Mark’s surge, on an uphill muddy section, saw him break clear and he went on to win very impressively by 36 seconds.
Without doubt Mark must rank as the most improved runner in the country right now.
Joyce Curtin from Glenbower carried the Cork colours in the under 17 race.  Going into the lead on the first of two laps she was joined by Aoife O’Grady who in turn took over the lead.  However, with about 500m remaining Joyce surged into the lead and stayed on confidently to add another fine victory to her impressive list.
Ciaran O’Lionaird of West Muskerry never got going in the under 17 race, with impressive performances from two Welsh runners who filled the top places.
Robert Connolly got clear of the field at an early stage fo the under 23 race, with Gareth Coughlan in close attendance.  Coughlan fell back as the race progressed and it was Eoin Higgins who finished strongest for fourth place.
Aoife Byrne was another who was never threatened as she race to victory at under 23 level, with Zara Murphy of UCC 14th.
Fionnuala Britton tried her best to stay with Scottish runner Morag McLarty, but was up against a very talented runner and had to settle for a fine second place.
Ireland teams won five of the six team titles on offer, as well as four of the six individual titles.  Excellent performances all round.  Well done to everyone. 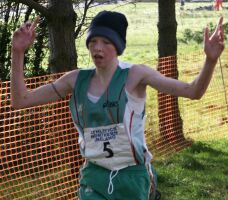