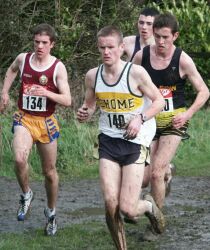 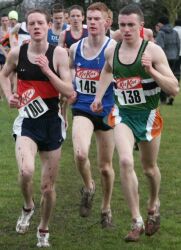 ALSAA, alongside Dublin airport was in perfect condition for the Kit Kat All Ireland schools cross country championships.  Weather conditions were acceptable, just drizzle and strong winds, nothing like what it could have been!
The senior boys race was reduced to a leading group of five after about 2k, including Jamie McCarthy from Kinsale and Mark Hanrahan from Douglas CS who set the pace.  Before long that group was down to three, Joe Sweeney, Andrew Ledwith and Mark Hanrahan who finished 1st, 4th and 5th in the Irish junior six days earlier.
By halfway Sweeney and Ledwith had opened a gap on Hanrahan, and they remained locked together until into the last lap when Sweeney broke clear.  With half a mile to go Hanrahan closed on Ledwith, passed him, and ran on strongly for silver behind Sweeney.  North Mon ran on strongly to take silver team medals.
Incidentally, most of the runners in the senior race complained they had not recovered from the Irish junior championships just six days earlier, a race held on one of the toughest courses in the country.  Athletics Ireland must ensure that junior athletes are never treated like this again.  Six days between two national cross country championships is simply not good enough.
The intermediate boys race saw Damien Dunlea from Colaiste Chriost Ri race into the lead from the start.  Before long he was clear of the field along with James King and Sean Smith.  The three had a great battle throughout the race, with Smith the first to feel the pace, leaving Dunlea and Smith to battle it out.  King tried several times to get away from Dunlea, but every time the Leevale man fought back.  It was well into the final lap before King finally had to yield, leaving Dunlea to win well.
Behind them Ciaran O’Lionaird was having a great run in the second group, well placed to take third for most of the race.  However, he was outpaced in the closing stages and finished an excellent fifth.
Well done to everyone, and best of luck to those competing in the schools international at the same venue in two weeks.
(Results)     (Photos)