It was unfortunate that the Kit Kat Schools international cross country was held on a weekend dominated by rugby and soccer.  Held in bright sunny conditions at ALSAA, the firm underfoot conditions were more akin to what you would expect in August.  Those who did make it to the event were treated to great exhibitions of cross country running by some of the most talented young runners in these islands.  And to cap it all there were two outstanding Irish winners.
Sean Smith from Cavan ran a confident race at intermediate level.  After a lap he shared the lead with English runner Ben Harding, clear of the following pack.  By halfway through the last of three 2k laps he had sprinted clear and looked all over a winner, with plenty of time to look around at where the rest of the field were.  He crossed the line five seconds clear of six English runners before James King finished 8th.  Cork’s Ciaran O’Lionaird was 23rd.
Smith becomes the eight Irish winner of this intermediate race, following in the footsteps of Mick O’Shea (1972), John Treacy (1974), Brian O’Keeffe (1989), Paul Donovan (1979), Paul McNamara (1991), Gareth Turnbull (1995) and William Harty (2000).
In the junior boys race Brendan O’Neill, who only took up running three months ago, was the toast of the Irish.  The early stages of the race were dominated by english runners, who looked likely to fill the first four positions at one stage.  O’Neill made steady progress and took over the lead on the last lap, only for Matthew Clarke to overtake him with 800m to go.  Clarke looked a winner until disaster struck for him as he went off course with 400m to go.  He quickly realised his mistake, but by them it was too late as O’Neill was clear, going on to become the first Irish winner at junior level.
Non Stanford of Wales was a convincing winner of the junior girls race, with Sara Treacy of Ireland finishing very strongly to take fourth place.  The intermediate girls race was dominated by English runners who filled the first five places, with Ciara Durkin best of the Irish in 6th.  Cork’s Joyce Curtin was 13th and Aoifa Cooke 30th.
Links;   (Photos)   (Irish Schools AA)
Photos; Colette O’Riordan relaxes; Phone Home!; Junior winner Brendan O’Neill; Sean Smith Looking Good! 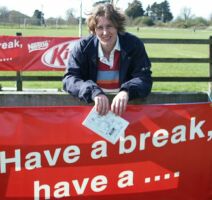 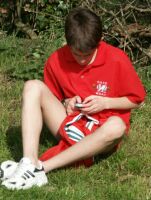 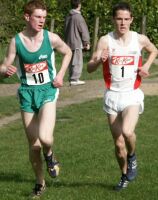