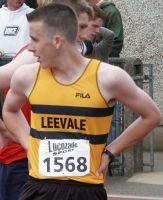 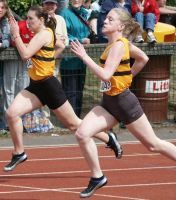 Leevale athletes were in fine form over the weekend.  At the British AAA under 23 championships Ailis McSweeney continued her excellent form in the sprints.  On Saturday she finished third in the first heat fo the 100m in a time of 11.88, qualifying for the final.  In that final she finished a creditable fifth, clocking the exact same 11.88 seconds.  Unfortunately, that is just outside the 11.80 that would qualify her for the European under 23 championships (to which her coach John Sheehan is team coach!).
On Sunday she lined up for the 200m and again qualified for the final, clocking 24.71 in third place.  In the final she finished sixth in a time of 25.58.  On Saturday she has another chance to qualify when she runs the 100m at the BUPA Cork City Sports on a brand new track at the Mardyke.
Meanwhile, Cathal Lombard lines up in the British AAA’s 10,000m championship at Watford on Saturday.  The field includes Bob Kennedy, Brad Hauser, Ben Noad, Karl Keska, Ian Hudspith and a host of other top class runners.  Should be an excellent race.
There was plenty to cheer about at the Lucozade Sport Munster under age track and field championships at CIT on Sunday.  Greg O’Leary had a fluent sprint double in the under 18 age group, easily winning the 100m and 200m.  He also sealed victory for Leevale in the under 18 4x100m, and then brought the 4x400m team from fourth to second with a sparkling 50.9 last leg. 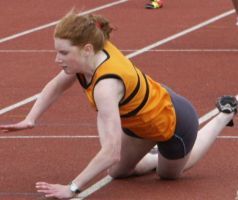 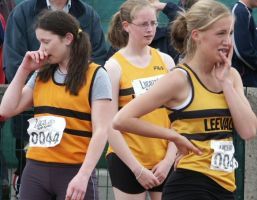