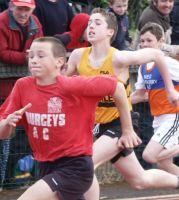 For most of the day the sun shone at the CIT track yesterday after early morning rain threatened to spoil everything.  Leevale athletes were in great form with a host of super performances.
Mark Hanrahan took the lead from the gun in the under 19 1,500m, and was immediately tracked by Jamie McCarthy from Riverstick.  Mark was never headed in this race and ran a fast last lap to run right away from his rival, winning in a time of 4:00.8, five seconds clear.
Ciaran O’Lionaird ran a similar race in the under 16 1,500m, although on this occasion there was no one to go with him and he won with 200m to spare.
The sprinters were in cracking form with Claire Looney winning theunder 15 100m, Lorna Buckley winning the under 16 100m, Orla Coughlan successful in the under 17 100m, and Aileen Pomphrett taking the under 18 100m.  As well as that

Claire O’Mahony won under 16 bronze, Amy Clarke won under 17 silver and Aoife Joyce under 13 bronze.  There was further success for the sprinters in the relays with wins in the under 12, 16 and 18 races, together with silver under 16, and bronze under 14.
Carl McNamara won the under 17 100m, while David Killeen won under 12 silver, Christopher Murnane won under 13 silver, Brian Manning won under 14 bronze, and Denis Forrest under 17 bronze.  Relay wins came from the under 14’s and 18’s, with bronze for the under 12’s.
Other successes came from KaiLyn Ng silver in the under 12 long jump; Denis Healy bronze in the under 13 high jump; Thomas O’Sullivan bronze under 14 250 hurdles; Brendan Perrott winner under 17 400m; Carl McNamara winner under 17 long jump; Aaron Hornibrook winner under 18 steeple and silver 1,500m.
More of the same next Saturday at the Evening Echo South Munster schools championships, and Sunday for the second part of the Cork underage championships.