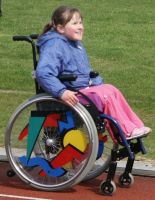 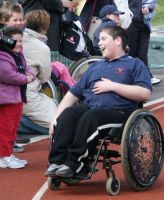 There were plenty of interesting races and throws at the annual Leevale open sports at Cork IT track on Sunday, although the cool windy weather did it’s best to make life difficult.
Seventeen runners finished the senior men’s 3,000m, with Leevale’s Mark Hanrahan setting a strong pace from the gun. Only James Murphy of UCC went with him, the others seemed of the opinion the leaders would come back to them.  They didn’t! So they had to work hard ot catch up to forma group of four – Hanrahan, Murphy, Brian McMahon of Carraig na bhFear and Robbie Neill of North Cork.  None of them managed to pass the Leevale leader, and soon dropped off the pace, leaving Hanrahan and Murphy by themselves.  With 300m to go Mark upped the pace again and went on to win in 8:44.9, a good time considering the weather.
Ailis McSweeney had a good win in the senior 100m from Orla Coughlan, while Deirdre Murphy and Kathleen Fitzgerald had good wins in the discus and shot respectively.  Donna hosford was well clear in winning the long jump.  In the men’s 100m Sean Manning gave Darren O’Donovan a good run for his money, and Joseph Nagle had a good win in the shot. 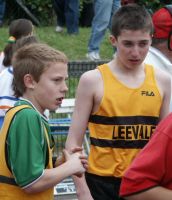