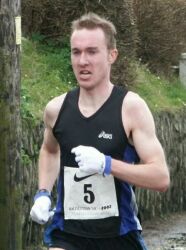 Cathal Lombard continued his climb up the Leevale ranking list with an outstanding run at the BMC meet at Watford yesterday.  Already after reducing his 5,000m time considerably this season, he did the very same with the 10,000m in a top class field, finishing just out of the medals in fourth place.  His time of 28:05.27 is inside the B standard for the World championships to be held in Paris at the end of August, and moves him up to second place on the Leevale all time lists.
At the BUPA Cork City Sports yesterday Ailis McSweeney again showed what an improved runner she is this season.  Taking part in the 100m she finished a creditable fourth in a top class field. Once again her time of 11.66 was inside the qualifying standard for the European under 23 championships.  But, once again, the following wind of 2.6m/s was over the allowed 2.0m/s.  She has her final attempt at qualifying at today’s National championships at Tullamore. 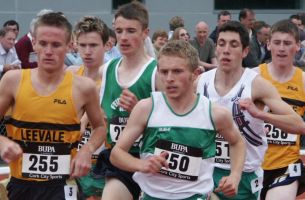 Mark Hanrahan was one of three Leevale runners in the junior 1,500m at the Mardyke yesterday, finishing second in a time of 4:00.17, behind Richard Corcoran who ran a very confident race.  Ciaran O’Lionaird finished fourth in 4:08.20, with John Shine sixth in 4:13.59.
The newly re-vamped Mardyke proved to be a superb facility, with the crowd practically in on top of the athletes as they raced.  An investment by UCC of €1.5m shows a big commitment on the part of the college authorities towards sport and is to be commended.  The whole set-up appeared to make the track smaller to many of the athletes.
Sonia O’Sullivan showed all her years of experience to win the 1,500m in a blanket finish, with Freda Davoren sixth.  Gary Ryan had a super win over Paul Brizzel in the 200m after finishing a close second in the 100m.  Gareth Turnbull ran a very confident race to win the 1,500m, while Grace Upshaw set a new meet record in winning the long jump with 6.74m, a performance that gained her the famed American Trophy for athlete of the meet.
Overall, another great meet with congratulations to the organising committee, UCC, and all the officials who helped out.   (Photos)