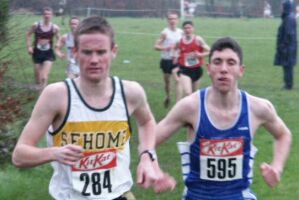 The Kit Kat Munster schools cross country championships were held at a rain soaked St. Augustine’s College Dungarvan yesterday.  The continuous rain made the surface very slippery but the course was excellent otherwise.
The senior boy’s race saw Jamie McCarthy of Kinsale CS take an early lead, but was soon joined by Mark Hanrahan of Douglas CS.  By the end of the first of four laps Mark was in the lead, and, while Jamie tried his best, there was no holding Mark who went on for another fine win.
Thomas Maunsell was part of the second group for much of the race until Colm Turner from Limerick went clear in third.  Thomas tried hard to stay with him but was passed in the last 200m by Timmy O’Donoghue.
Keith Linehan was another who was passed in the closing 100m by richard Byrne after a good run.
The senior girls race saw Aisling Geary run a strong race to finish fourth behind winner Aoife McCarthy, while John Shine was ninth in the intermediate race.     (Photos)