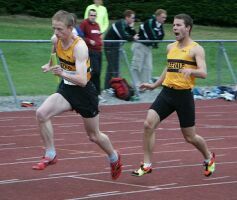 Both Leevale teams ended the track and field season on a high note with reasonable placings at the Mazda league finals at Tullamore on Sunday.  The brilliant summer weather of recent weeks deserted us to be replaced by the more normal wet and windy type.
At the Woodies DIY nationals a week earlier there was much talk on who would win the men’s sprint relay.  Leevale did not come into the reckoning!  However, there was a surprise in store on Sunday.  Sean Manning got off to a great start, passing on to Carl McNamara, 400m specialist Paddy O’Gorman, with Jer O’Donoghue anchoring.
Much has been said about the woeful state of Leevale baton changing in recent times – the men dropped the baton in the second round (!), as well as other unmentionable occasions!.
There must have been some serious talking done before Sunday because the men got it right – some might say perfect!  The result was a new club record of 42.31, leaving them well clear of all other teams.
Jer O’donoghue must have liked the winning feeling he got from the relay because he followed up with a runaway victory in the 100m, leaving everyone with the feeling that there is plenty more to come.
Ailis McSweeney has ended the season with all the Leevale sprint records – 60m, 100m and 200m.  Not bad at all! 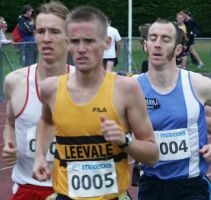 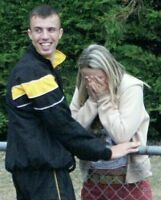 There were two more excellent performances from her on sunday with a third place finish in the 200m, followed by a close second place finish in the 100m, as well as anchoring the relay team to third place.
Paul O’Flynn was in fine form with victory in the long jump and a fifth place finish in the high jump.
Kathleen Fitzgerald picked up valuable points in the shot with second place, the same position as Deirdre Murphy in the discus.
Third place finishes were picked up by Jessika Zebo in the 100m hurdles, and Donna Hosford in the long jump.
Leevale women finished up the day in fourth place, with valuable points picked up by Susan O’Reilly, Lorna Quinn, Niamh Cremin, Orla coughlan, Amy Clarke, Melissa Mullins, Carmel Parnell, and Claire McSweeney.
Leevale men finished the day in fifth place thanks to the efforts of Mark Hanrahan, Darren O’Brien, Sean Casey, Kevin Shine, Neil Walsh, Ronan Crowley, John Shine, Joseph Nagle, and Thomas Maunsell, along with those mentioned above.
The day was completed with some great renditions of old favourites by the club’s leading vocalists on the bus home!!